Writing Tips #2: Everyone Writes In Drafts

Here's the second tip that I would give any writer (if you want to know the first, it's here).

No-one can write a great book in one draft.  I've never met a single writer who could do that; a book is just too big and complicated.  You need to build it over a number of drafts.  Everyone does this differently – but believe me, everyone does it.

The best example I can think of is Jon Stallworthy's Between The Lines: WB Yeats's Poetry In The Making.  I found this in a second-hand bookshop, and it changed my life.  Stallworthy meticulously went through all of Yeats's discarded drafts, and reconstructed evidence of exactly how he'd written his poems. 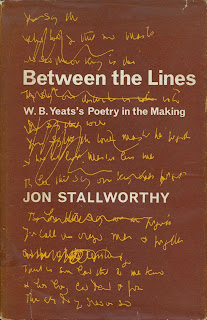 Here's the finished text of my favourite Yeats poem, The Second Coming (click on the image to see it large): 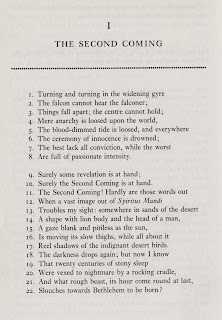 Brilliant, isn't it?  Hard to imagine it could ever have been any other way.  But have a look at the first draft: 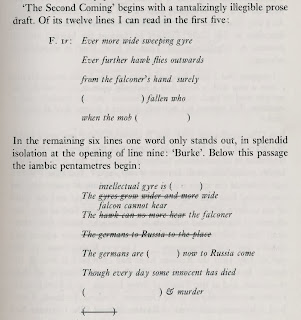 "The germans are now to Russia come"???  And look at this – several drafts later: 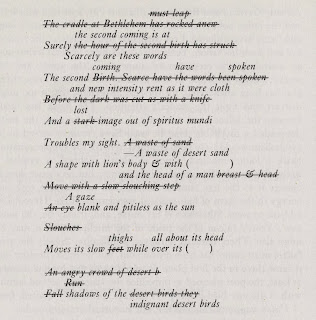 "The second Birth"?  Clearly, he didn't even know what the poem was going to be called, well into writing it!  Even very near the end, he was circling around the incredible final image that now seems so inevitable – developing it through sheer bloody-minded trial and error: 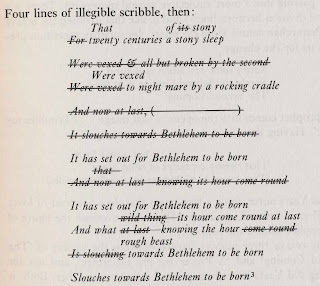 When I read this, I realised that even someone I thought of as a genius had to build their work layer by layer, draft by draft.  No-one just sits down and has perfect work pour out of them.  And if this is true of a poem, how much more true must it be of a novel?

Hi David, many thanks for your visit, and your comment! I've heard similar things about Mozart. I think he was quite unique, though, as you say.

I've never heard of a writer who could do it all in one go. Even the great Jacqueline Wilson takes 2 drafts, I believe...

This is so inspiring. I finished my English degree thinking that writers were born rather than made, with next to no understanding of how they might develop their craft over time, and how indeed a book itself can be developed, layer by layer. Not having this understanding meant I became unreasonably dejected about my early attempts at tackling a novel, putting me off writing for years. Books like the one you show above could have saved me from a lot of unnecessary angst.

Thank you so much Emma, that means a lot to me, because what you describe was very much how I used to see writing too. I think it's a very common misperception. And many writers encourage it, not wishing to own up to all the hard work that goes on behind the scenes, perhaps fearing that it might somehow diminish the end product. But I think it makes the end product even more amazing when you know how it was really done.

Good luck with your own writing – and don't worry if your early drafts are bad, everyone's are! In fact, it's better if they're bad, because it gives you more to work on with the later drafts...

Thank you for all your inspiration SF Said! I read Varjak Paw two years ago when studying creative writing at Uni. I had to read lots of new children's books by modern authors - something I wasn't really looking forward to if I'm honest. But when i stumbled on Varjak Paw, I couldn't believe it. It completely captivated me. I read it in just a couple of days! Anyway, i just wanted to say thank you.

Thank you for your wonderful comment, Dominic! I always hope that readers of all ages will find things to enjoy in my books, so your words really mean a lot to me – especially coming from someone studying creative writing! Have you had a chance to read my new book Phoenix yet? It's not about Varjak, but I think it's the best one I've written so far...

Thanks so much again, and good luck with your own writing,
SF

I LOVE this post. Currently feeling like I'm going one step forward two steps back with my probably far too ambitious book. I also have Eliot's The Waste Land draft book and it is similarly interesting in terms of amount of redrafting. I agree with Emma's comments, as I felt the same for years.

Thank you so much, Bexter - I'm really glad it's helpful. I'm currently in the seventh year of work on a book called TYGER, and even now, I often feel like I'm taking one step forward and ten steps back - so I can totally understand those feelings! But hang in there, set yourself achievable goals, keep working at it every day, doing everything you possibly can to make it better - and you'll get there in the end!

There's a bit more on TYGER - and the mysteries of the writing process - in this blog post, if you want it:
http://www.sfsaid.com/2016/01/i-had-amazing-message-from-reader.html


All the best,
SF