I believe all writers are readers, and all readers can be writers – something I've written about elsewhere recently.  So as Patron Of Reading at Fortismere School, I decided with brilliant librarian Gillian Ward to focus on reading with Year 7, and writing with Year 8.  And it was a pleasure last week to spend time working with two Year 8 classes on creative writing. 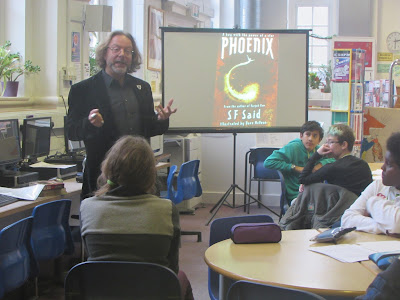 I talked them through the three main stages of the writing process: getting an idea, writing a first draft, and then editing it to make it as good as it can be.  I asked them to think of ideas for stories they would want to read themselves, and then to write drafts and edit them.  We only had an hour, but in that time, they produced some amazing work, and I'm delighted to share some of it here:


Lois
The sun shone through the windows, the light bouncing off the plastic coated covers and labels. The book sat on the shelf, the top shelf, above the others. The book had been there all day. All week. Before the sun arrived on the shelf, there had been darkness; a cramped, dusty darkness that had shadowed its pages and words and story. A story that had been told to the first person to open the book. And the second. And the third.

Jai
He woke up in a frivolous mood and clambered up to the deck of the ship. He saw the moon’s pockmarked surface through the plexiglass windows and sighed to himself. Back on Jupiter he knew his family would be moving to the secret base in the ocean in preparation for the war. He stood, gazing out at the atmosphere studded with giant balls of blazing gas and wondered if he would make it back to his home planet alive. Silently behind him, Will shuffled out of the sleeping quarters and made himself tea: rooibos, a rare plant scavenged from the remains of earth.

Issei
Sam loves books. He spends all his breaks in the school library. This separates him from the others. Even though the librarians praise him, his friends don’t. Well, he can’t really call them friends now. He started to prefer books to his mates and one by one they left him. Now, the only friends he has are books. He’s even become friends with Harry Potter! 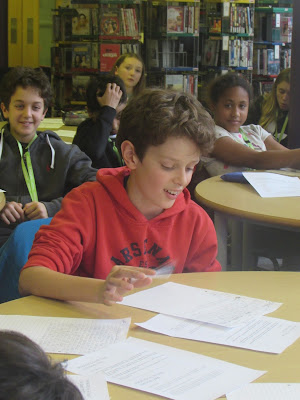 It was a pleasure working with these students – some of their ideas just blew me away.  I hope they continue to work on their writing, because if they do, before too long, I think they'll be publishing books of their own!  Here's a link to some writing tips I've done on this blog that might be helpful with that – and if anyone from Year 8 has any questions or would like to leave me a comment, this is the place to do it!